The dialectic or logic stage of classical education is the second stage of the trivium. It is where children learn discernment, as they sort out the facts they learned in the grammar stage. Here middle school-aged children learn to debate, argue, and detect logical fallacies. They do this in preparation for the last stage of the trivium, the rhetoric stage. If they go on to study the quadrivium in tertiary education, they’ll find learning a lot easier as we’ve given them amazing tools for learning such as a Latin basis for languages.

This article will discuss the logic stage of the trivium in detail. It is one in a series of classical education articles, which can be found here. HDIH participates in the Amazon Services LLC Associates Program, an affiliate advertising program designed to provide a means for sites to earn advertising fees by advertising and linking to amazon.com.

How Does the Logic Stage Fit into the Trivium?

The logic stage is the second stage of the trivium in classical education. It comes after the grammar stage and before the rhetoric stage. In the:

Although not always seen this way in modern times, the logic stage (for the Christian especially) is inherently religious as Christians argue one cannot know anything without fearing God first (Prov 9:10). As such, reasoning starts with the knowledge of God.

What Does Dialectic Mean?

The word originates in the Greek language and has to do with ‘conversing’ and debating. Essentially, you’re ‘dialoguing’ about something. In the classical method, you’re debating, conversing, and dialoguing about the truth of different opinions using logic. Douglas Wilson explained dialectic like this:

Dialectic can also be referred to as logic. After a child has memorized piles of data, he or she must learn how to sort them out. Dialectic, or logic, is the process of doing this – this goes over here, and that goes over there. The Case for Classical Christian Education, p. 133.

Why We Need the Logic Stage of Classical Education

Many people these days cannot discern between a badly assembled argument and one that is cleverly and logically constructed. They are susceptible to swallowing whatever garbage the media, internet, or other literary sources publish. School graduates are often vulnerable in this way because they have not been taught how to critically analyze a statement or belief.

This means the media and other sources are able to feed the population rubbish, and they accept it willingly. Dorothy Sayers, the mother of the modern Christian classical method had this to say on the subject:

Have you ever followed a discussion in the newspapers or elsewhere and noticed how frequently writers fail to define the terms they use? Or how often, if one man does define his terms, another will assume in his reply that he was using the terms in precisely the opposite sense to that in which he has already defined them?… are you troubled because it is inelegant or because it may lead to dangerous misunderstanding? – Dorothy Sayers, Lost Tools of Learning, p. 2.

Being unable to critically analyze information has unfortunate effects and implications for our society morally, socially, theologically, and intellectually.

Our government often responds to popular demand based on poorly thought-out arguments, too often garnered from hyperbole and fearmongering from different sources.

The reason they can do this so easily is that people have usually not been taught how to think in their primary and secondary years. They have not been taught logic; that is to discern truth from fiction.

It is for this reason we need the logic stage of classical education. We must teach our children to discern. How to work out what’s right and what’s wrong, what’s good and what’s bad.

The Christian sees this is an essentially religious question. For this reason, debating topics have always been garnered from subjects such as theology, ethics, and ancient history (Sayers, p.6).

One reason classical educators claim the classic method works so well is that it teaches students according to their natural intellectual bent at different points in their lives.

The Pert Age, which follows upon this (and, naturally, overlaps it to some extent) is only too familiar to all who have to do with children: it is characterised by contradicting, answering-back, liking to “catch people out” (especially one’s elders), and the propounding of conundrums (especially the kind with a nasty verbal catch in them). Its nuisance-value is extremely high. It usually sets in about the Lower Fourth. [Sayers] 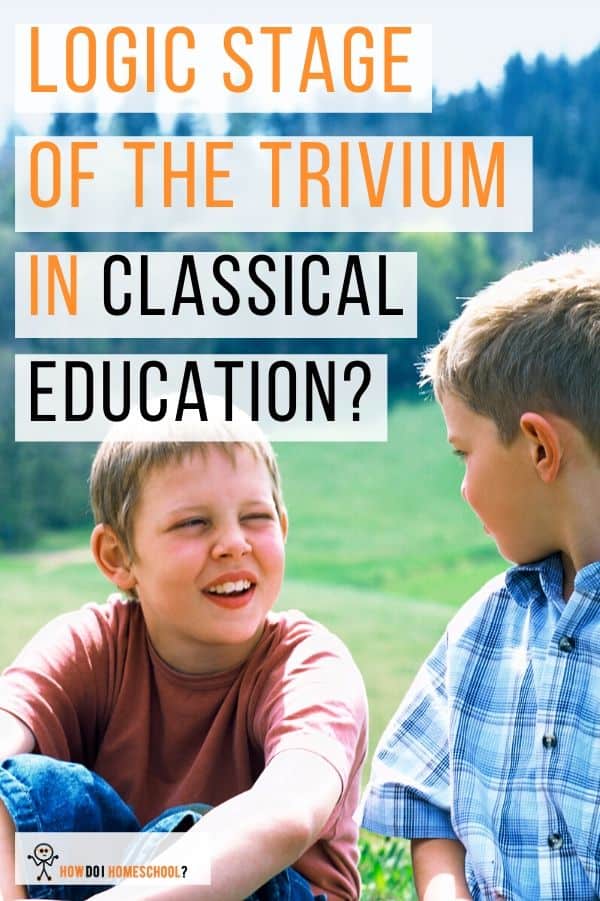 What Age are Children in the Logic Stage?

The short answer is around 9 to 14-years-old. Or around the junior high school years.

But, the reason classical educators define these ages roughly is that every child is different and enters these developmental phases at different times. Instead of teaching to an age requirement as schools do, homeschools have the luxury of beginning each stage when children show signs they’re ready to enter those stages.

In the case of the logic stage of classical education, children show signs they are ready to start this phase when they are disposed towards pertness, and they manifest a capacity for abstract reasoning and endless argument.

Thus, when children want to argue, we ought to teach them how to argue. Indeed, teaching children according to their interests helps them retain information and enjoy the process. This is another reason we encourage debate in the logic stage.

What Do Children Learn in the Logic Stage?

In this age, children want to know why and how come. In the logic stage, children learn discernment and understanding using formal symbolic logic. They learn how to make distinctions and evaluate those distinctions. As Douglas Wilson said in The Case for Classical Christian Education:

By teaching children discernment and understanding, we create very different pupils to those found in today’s public school classrooms.

Learning begins to change significantly in the dialectic stage as children enter a pert phase of development and become argumentative. The following subjects change in the following ways:

In the logic stage, children love defining terms. And that’s great because we want to teach them how to do it properly.

Classical educators show students how important precision with terms is. This is because, if the student doesn’t define his terms, the listener may add their own and misunderstand the argument.

If students don’t define terms – especially in a debate – their arguments can be dismantled more easily. Hence, students have an incentive for defining terms and being precise with their thinking and words.

What do we mean by defining terms? Dorothy Sayers gives us an example below:

What, then, are we to do? We cannot go back to the Middle Ages. That is a cry to which we have become accustomed. We cannot go back—or can we? Distinguo. I should like every term in that proposition defined. Does “Go back” mean a retrogression in time, or the revision of an error? The first is clearly impossible per se; the second is a thing which wise men do every day. “Cannot”—does this mean that our behaviour is determined by some irreversible cosmic mechanism, or merely that such an action would be very difficult in view of the opposition it would provoke? “The Middle Ages”— obviously the twentieth century is not and cannot be the fourteenth; but if
“the Middle Ages” is, in this context, simply a picturesque phrase denoting a particular educational theory, there seems to be no a priori reason why we should not “go back” to it—with modifications—as we have already “gone back” with modifications, to, let us say, the idea of playing Shakespeare’s plays as he wrote them, and not in the “modernised” versions of Cibber and Garrick, which once seemed to be the latest thing in theatrical progress. – Lost Tools of Learning, p. 8.

Debating in the Logic Stage

There are many benefits of debating, especially for students who live in a world with arguments coming from every direction. It is for this reason that we introduce debating into the logic stage of classical education.

Through debate, children also become more interested in the topic they’re studying. For example, instead of boring students by getting them to read an essay on the benefits or disadvantages of democracy, classical educators will get students to debate the topic.

Using a few clever debating tips and techniques, a child who does the logic stage of classical education will be able to argue with convincing intelligence, having great substance behind their words.

Latin in the Second Phase of the Trivium

The Latin language, which children began studying in the grammar stage, is continued in the dialectic stage. By learning Latin, children discover the root meaning of many words they are familiar with. This gives them layers of meaning, allowing them to more precisely define their terms.

Learning Latin in the logic stage also means students are able to learn other subjects more easily as they don’t have to struggle so much with learning new words because Latin gives them plenty of help with this. Children can continue or discontinue Latin in the rhetoric stage, depending on the student’s interest and aptitude for the subject. How to Get a Classical Education Curriculum for a Homeschool

If you want to use the classical homeschooling method in your homeschool, you don’t have to reinvent the wheel and create your own curriculum. Instead, there are plenty of decent classical Christian education options around such as Classical Conversations, Veritas Press and My Father’s World (the latter is a mix between Charlotte Mason and classical education).

I’ve looked into several of these options which can be found reviewed here.

Further Reading on the Logic Stage of Classical Education

I can’t recommend Dorothy Sayer’s Lost Tools of Learning more highly. It is a must-read for anyone seriously considering giving their children an education in the classics. This is because it is the basis of most Christian classical education today.

Another good book that will help you understand this learning approach, is Douglas Wilson’s The Case for Classical Christian Education. Wilson bases his arguments heavily on Sayer’s writings but adds a lot of flesh to the bones.

The logic stage of classical education helps children how to discern and evaluate the facts they learned in the grammar stage. In this phase, children are in an argumentative phase of life, so we teach them how to do this well, using debate. We teach them to write argumentative essays and define their terms. Latin helps students define terms, so we continue this in the dialectic stage. But, we must not stop there. We must continue on to the rhetoric stage of the trivium to teach children wisdom with words and poise in delivery. You can learn about that here.

Most adults don't particularly want to relive their schooling experience on a daily basis. They would gladly move on to a new life devoid of homework and teachers. Very, very few adults will passionately blog about their schooling some 15 years after graduating. This makes Rebecca Devitt somewhat unique. As it happens, she was homeschooled. And she loved it. Still does. And she wishes every kid could get a taste of homeschooling at its very best. Her website How Do I Homeschool, is a springboard for parents to see what a life of homeschooling could be for both them & their children. When she's not blogging Rebecca is still homeschooling her-adult-self by learning Latin, growing weird vegetables and most importantly looking after her two children Luke & Penny. She has a husband Tristan and is a participant at Wollongong Baptist Church. She's also written a book about why parents should homeschool called 'Why on Earth Homeschool'.
Articles: 187