Should I Homeschool My Child? Why Homeschooling IS the Best Choice Should I Homeschool My Child? Why Homeschooling IS the Best Choice

These days, many people are turning to homeschooling for their children’s education. Some have started asking the question, ‘Should I homeschool my child,’ due to problems with school. Others feel they want to spend more time with their children. Still, others think they can do a better job of educating their children than a school can.

If you’re one of the parents asking these questions, you should know that homeschooling is not as hard as you think. So long as you’re a loving parent who is willing to go out socially with your children and put a little bit of time into helping them with their education, you should do fine. Parents Agonizing Over the Choice to Homeschool

Making the choice to homeschool is not easy. Home education is considered an alternative choice and is looked upon with some suspicion by many. The stigma is lessening as the myths referring to weird unsocialized homeschoolers dissipate, but homeschooling parents still have to contend with the critics who hold that home education has significant disadvantages.

Initially, my parents never considered home education, but like many homeschooling parents, they were forced to look at home education when school failed to prevent the corruption of their children’s morals by peers.

My parents started our education by putting us in school. Referring to this period, my father said:

‘Everybody else was enrolling their children in school, and of course, as a parent you’re told that your children won’t get a decent education outside of school. Even though our children were crying and not happy at school, we diligently kept sending them back to ‘get an education’. When we decided to homeschool we really beleived our children would be educational drop-kicks – you know, checkout chicks and ditch diggers. However, one became an architect, the other a lawyer, and the other did a year of medical school. We were certainly surprised with the outcome!’

As my parents discovered more and more problems we were having in school, they became desperate to find an alternative. One homeschooling mother in our church suggested we homeschool, at which my mother laughed at the apparently ridiculous suggestion. My mother then replied, ‘I don’t have the educational background to homeschool my children.’ (This is a common objection that is addressed and overcome in this article.)

She then went home and told my father of the conversation. He stopped for a moment, looked at my mother, and said, ‘Well, why shouldn’t we homeschool?’

And that was how my new educational journey began. For me, going from school to homeschool felt like leaving a dark tunnel and stepping out into a warm meadow full of fragrant daisies!

Not everyone begins their homeschooling journey the same way my parents did. Many hold different philosophies that clash with traditional educational methods. There are four big categories of reasons parents choose to teach their children at home including:

Of course, there are  also other reasons a parent might choose home education (peer pressure, homeschoolers have better test scores, and more opportunities to play in nature) and you can read about these in more depth in these two articles:

Why Are More Parents Homeschooling?

The popularity of home education has exploded in the 21st century thanks to more parents realizing the moral (and religious) heritage in our schools is dying. They have given up trying to reform schools and many no longer believe (at least public) schools can pass on good values to their children.

Some of these disillusioned parents are beyond frustrated with schools and, while they don’t have complete confidence in their own ability to teach, think homeschooling couldn’t possibly be any worse than the school system is. 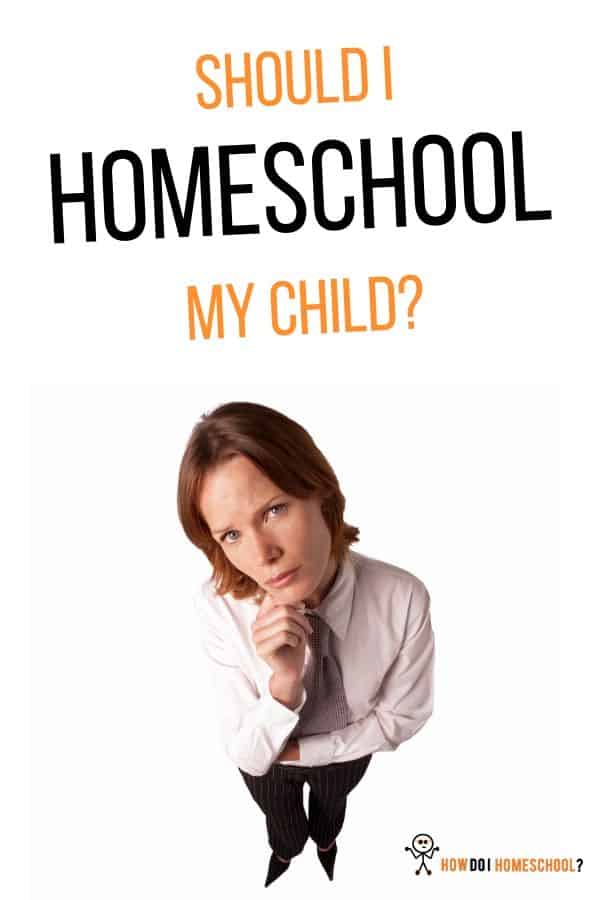 The arguments for homeschooling your child can be either positive or negative (or both!).

Some of you are asking, ‘Should I homeschool my child,’ because you’ve seen other homeschooling families who seem calmer and happier compared to your family. Others might be home educating as this enables them to live certain lifestyles they’re fond of which wouldn’t be possible if their kids were in school (for example, traveling families, also known as world-schooling families).

Some other positive reasons to home educate are: Some of you are asking, ‘Should I homeschool my child’ because your children have been bullied – or a school-mate showed your 7-year-old pornography. The negative reasons parents choose to home educate include:

Both positive and negative reasons to homeschool are valid, and you shouldn’t be bullied by other people who think you’re ‘sheltering’ your children, just because you can’t stand to see them influenced wrongly or come home in tears because they’re getting smacked over the head every day by a bully.” But, it’s resilience training!” many people cry.To every adult in the world, the treatment many children experience in school is unfair bullying and adults would be liable in a court of law for their behaviour. But for a naive, defenceless kid in the public school playground, it’s called ‘resilience training’.

“I Just Don’t Think I Have the Patience to Homeschool My Child.”

Many parents question whether they would make good home educators as they don’t believe they have enough patience to homeschool. One home educating mom answered this query concisely when she said:

I planned on public school right up until the moment the teacher told me she didn’t want my son in her class. She suggested I homeschool. For the record, I thought she was crazy! I didn’t have the patience for that. And guess what? I was right, I did not have the patience for it, but I learned, and he learned and we fell in love!

Another mom tackled this question by saying:

I’ve known so many who’s main comment against homeschooling is that they don’t have patience. They say, “Oh, I could never homeschool, I just don’t have the patience for it!” as if homeschool moms are just mystically imbued with the stuff.

Having true patience is obviously not a requirement, or no one would homeschool!

It is definitely necessary in day to day living with children, but the big picture is more attainable I feel for most.

Impatience, like many bad traits we possess, can be weeded out of our character by deliberate habit training (I know this from personal experience). Just like people believe they can deal with their stress, anger, or other sins that hold them back, parents can deal with their impatience and flourish as home educators.

Why I Struggle When Someone Asks Me, ‘Should I Homeschool My Child?’

Personally, I really struggle when someone asks me, ‘Should I homeschool my child?’ The ‘old man’ within me wants to say something like, “Yes. Quite frankly, everyone, except a small minority of parents should be homeschooling because public school is a schmuck system designed to socialize, more than to educate and it’s really a socialization system dressed up to be an educational system.”

From experience, I’ve learned this generally gets awful reactions. This is because education is a hot topic. Many people are as devoted to their schools as they are to their country. If anyone tries to attack these institutions, the listener often defends them or goes into their shell and discontinues the conversation.

These days when someone asks me whether they should homeschool, I say, “Home education is a great option and you’ll probably love it especially if you stick at it and iron out all the teething problems that initially arise.”

But, the other day, I realized that what I really wanted to say was what Penelope Trunk said:

The biggest lie homeschoolers tell is that home education is not right for everyone. School is totally ineffective. We all know our schools are broken. We are trying to fix them. So the kids in schools are guinea pigs. The bar is very low for how much better life needs to be outside of school for it to be better than school. [Penelope Trunk Education]

While a lot of moms will say, ‘You’ve got to choose what’s right for you,’ and ‘Consider the pros and cons and weigh it all up,’ I am going to just come out and say it. Yes, you should homeschool your child. School’s not hard to beat. I know this because I wrote a book about it with plenty of statistics on all of these issues. I’ve looked at the pros and cons of home education closely and experienced these for myself. I can now say with confidence, homeschooling wins hands-down. 5 Signs Your Children are Doing Busywork, Not Useful Homework

Ever get frustrated at the amount of busywork your children[...] What Are Living Books & How to Use Them (Charlotte Mason)

One of the hallmarks of a Charlotte Mason education is[...]