In schools, peers exert considerable influence over schoolchildren through peer pressure. This pressure is more potent than any other influence in school, including the influence of teachers. While some peer influences are positive and spur schoolchildren to good actions and thoughts, negative peer pressure in school is common and a massive cause of misbehavior and rebellion. Sometimes this pressure is so bad it may set some students up for failure in life through drug addiction, alcohol use, or unwise relationships.

But, why do good children follow the lead of bad role models and influences?

Simply because peers have the power to make each other supremely happy or utterly miserable – and peers can exert social pressure (consciously or unconsciously) to do this. For those without an iron will, giving in to the group’s demands is more straightforward than standing resolute and facing persecution for their decisions.

Schoolchildren can often avoid misery if they conform to the peer pressure at school. However, this isn’t always a good thing. Therefore, in this article, we’ll be looking at the following: What is Peer Pressure?

Peer pressure is being influenced by people in one’s peer group. This influence can produce positive or negative behavior in the one being affected.

It often encourages children to become better people with better characters when it is positive.

It corrupts students when negative, so they develop a more unwise and foolish character. Negative group pressure will sometimes make students pay dearly for their poor choices during their school years.

To understand how peers exert their influence so persuasively, it’s helpful to look at a few examples.  Some examples of positive peer pressure include:

Some examples of negative peer pressure include:

Other examples of peer influence, which can be applied positively or negatively, include:

Students can also place pressure on themselves, called self-pressure. This can be good or bad for students. An example is when a child with high academic ideals and standards gets anxious (and might even break down) when they perform tests or study.

Even though their family and friends may not be exerting pressure to work hard, students may want to do so of their own accord. There are a few different types of peer influences, namely:

It’s helpful to identify the type of pressure you or your child is dealing with to know how to stop the problem if it’s becoming too big.

Negative peer pressure affects children’s attitudes and behaviors profoundly. Some of the effects are:

Sadly, Bronfenbrenner said that as a child’s trust in school peers increases, they simultaneously lose optimism, self-worth, and respect for their parents. [Why on Earth Homeschool]

Effects of  Negative Peer Pressure on the Family Unit

Negative social or group pressure in school can weaken a parent’s influence on their children. When a child’s peers negatively comment on the family relationship, this can undermine the trust children have in their parents.

Sometimes peers might jeer at the disciplinary actions parents choose or encourage rebellion when they hear about parents’ decisions.

Unfortunately, peer groups often discourage family intimacy and mock the child that makes the mistake of hugging their parent in the schoolyard (or the teen that asks their parents to a movie).

Among school families, siblings and parents are rarely a schoolchild’s best friends. Instead, classmates hold the privileges that family should have.

Among homeschooling families, this is usually different. As a generalization, many homeschoolers count their parents among their best friends. They turn down the invitation to a friend’s party to attend a family dinner.

They even like going to the movies with their parents. What a contrast! But, it shows that teenagers don’t have to be morose and opposed to parents in all cases. Perhaps this is more a result of peer pressure than anything else.

Peers Often As Influential As Teachers and Parents

In a 2010 study on peer groups and their influence on teenage substance use, researchers discovered that a teenager’s peer group has a greater influence on adolescent smoking than parents.

In the Journal of Primary Prevention study, researchers propose that social influences in school highly predict an adolescent’s behavior around dieting, medication taking, sexual intercourse, and substance use.

The article questioned whether parents could counter the negative effects of peer influence in schools. Researchers concluded the only way parents could buffer this effect was to strengthen family ties and discourage teenagers from associating with peers who are a bad example and engage in destructive behaviors.

They said a parent’s influence over their schoolchild’s choice not to smoke occurred when they prevented their children from forming friendships with other children who smoked.

While some exceptions exist, homeschooling parents are far more efficient at transmitting their values to their children than parents of schoolchildren.

Home educators generally have more time and interest in molding their children’s character than teachers. Conversely, public school children have lots of unintentional character molding from peers in their classroom.

With high teacher-to-student ratios, public school teachers don’t have the time (and sometimes the interest) to mold every child’s character in their classroom positively.

At school, your child is one of many. The teacher does not have the time or the mental resources to keep track of each one with much detail. While your kid is in their classroom, the teacher may try to have some input about work habits, but as soon as one class departs from their sight, they are focusing on the next group of crazy kids. Teachers HAVE to wipe the slate between classes, or they will go crazy. And they have no desire to take that emotional baggage home with them — they do have lives and families of their own, so they ignore it until class the next day. [iHN blog] Peer Pressure is Usually Bad, But We’re So Used to Convincing Ourselves It’s Good!

If I were to time travel back to the 1500s and recommend a parent should send their child to an institution (called public school), and at the end of 12 years, they would receive back a less well-behaved, less curious mind and have a weaker relationship with their parents than if they were to teach children at home, what might they say?

It almost seems like there is a deliberate attempt to blind us to school’s obvious effect on many children.

Some children manage to go to school and come out illiterate.

Even though sex, drugs, and alcohol are prevalent in schools, we are so desensitized to peer influence (having experienced it ourselves) that we consciously expect our children to immerse themselves in poor school culture and emerge unscathed.

Researchers Maté and Neufeld explain how desensitized many of us are to the issues of peer pressure:

Today’s adults or parents think it is normal for children to be peer-oriented and often antagonistic toward their parents…Peer orientation masquerades as natural or goes undetected because we [adults] have become divorced from our intuitions and because we have unwittingly become peer-oriented ourselves.’ For millennia, always until recently, culture was handed down vertically from generation to generation. Now, however, children are generating their own culture and transmitting it … horizontally within the younger generation. [Neufeld and Maté (2005)]

Because many of us were raised in school institutions, we think negative peer influence is ‘alright’ (think of how we call bullying ‘resilience training’). This is a misconception.

‘Peer orientation breeds bullies and their victims. We have been dangerously naïve in thinking that by putting children together, we would foster egalitarian values and [relations]. Instead, we have paved the way for the formation of new and damaging attachment hierarchies… Because of the powerful attachment reorganization that takes place in the wake of peer orientation, schools have also become bully factories…’[Neufeld and Maté (2005)] Children learn from whatever environment they are placed in – that’s the nature of children. They learn from parents, siblings, movies, television, and other social influences. These inputs contribute to the whole person and determine a person’s character when older.

In earlier societies where children worked alongside parents, they learned what their folks did – whether that was good or bad.

Back then, a child’s primary input was their parents.

You can also become your child’s primary input by homeschooling them. It’s not difficult, but it usually requires sacrifices of time and money.

Many homeschooling parents believe these sacrifices are well worth the advantages of raising respectful, well-educated children. Although peer influence can be positive in some cases, it so often manifests itself negatively and destroys family relationships and the character of the student. Negative peer pressure can be avoided by limiting the influence of peers. This said, the best way to negate these influences is to strengthen the influence of parents. This can be done effectively by homeschooling children. 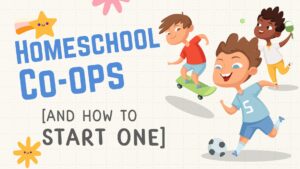 Homeschool Co-Ops: Everything You NEED to Know [PLUS How to Start One!] Cool Math Games that are Fun, Inspiring, and Offline!