Grade 1 is an important year for homeschoolers. The books that are used in this grade level should be carefully chosen to ensure that the child is receiving a well-rounded education. Here is a reading list of Grade 1 homeschool books for 6-year-olds.

This list includes living books (educational storybooks) used in many Charlotte Mason curriculum packages and books commonly found in classical education curricula. It also has a few books from the Sonlight book list.

You can also see if you can find them on Audible or Youtube as audiobooks. Also, remember that you can pick books that are a grade above to stretch your child’s learning and literary capabilities.

If you’re after a curriculum, make sure you check out these, which are some of the best homeschool curriculum programs around.

Affiliate links are used in this article.

The books below are often found on a lot of kindergarten homeschool book lists. If you child is at a simple comprehension level, these books will be perfect for them.

The Gruffalo by Julia Donaldson (OUR FAVORITE!)

The Little House by Virginia Burton

The Story About Ping by Marjorie Flack

The Little Engine that Could by Watty Piper

Blueberries for Sal by Robert McCloskey

One Morning in Maine by Robert McCloskey

Stone Soup and other folk tale retellings by Marcia Brown

The Story of Little Babaji by Helen Bannerman

Various animal stories by Thornton Burgess (WE LOVE THESE!!!)

Poems and Prayers for the Very Young by Martha Alexander

A Child’s Garden of Verses by Robert Louis Stevenson

A Child’s Book of Poems by Gyo Fujikawa

The World Treasury of Children’s Literature selected by Clifton Fadiman.

The books below are found on many homeschool Grade 1 book lists.

How to Behave and Why by Leaf, Munro

How to Speak Politely and Why? By Leaf, Munro.

Wise Words – Family Stories that Bring the Proverbs to Life by Leithart, Peter.

The Courage of Sarah Noble by Dalgliesh, Alice.

A Light in the Attic  by Silverstein, Shel.

The House that Jack Built  by Frasconi, Antonio.

Sammy the Seal by Hoff, Syd.

Danny and the Dinosaur by Hoff, Syd.

The Carrot Seed by Krauss, Ruth.

Inch by Inch by Lionni, Leo.

The Magic Fish by Littledale, Freya.

Frog and Toad Are Friends by Lobel, Arnold. (We love this one!)

There Was an Old Lady Who Swallowed a Fly  by Tabak, Simms.

Quick as a Cricket by Wood, Audrey.

The Potluck Supper by Davoll, Barbara.

Andy and the Lion by Daugherty, James.

Angus and the Ducks by Flack, Marjorie.

Bedtime for Frances by Hoban, Russell.

A Gift for Grandpa by Hunt, Angela.

George and Martha by Marshall, James.

Little Bear by Minarik, Else

If You Give a Mouse a Cookie by Numeroff, Laura (SERIES)

A Day at the Fair by Richardson, Arleta. (SERIES)

Grandmother and I by Buckley, Helen.

May I Bring a Friend? By De Regniers, Beatrice.

Just Me by Ets, Marie

The Big Snow by Hader, Berta.

Whistle for Willie by Keats, Ezra.

The Little Engine that Could  by Piper, Watty.

The Tale of Peter Rabbit by Potter, Beatrix. (SERIES)

Where the Wild Things Are by Sendak, Maurice

Thy Friend, Obadiah by Turkle, Brinton.

The Biggest Bear by Ward, Lynd.

A Chair for My Mother by Williams, Vera.

The books below are found on many Grade 2 homeschool book lists and are a good stretch if you’re finding your children have advanced reading skills.

Dick Whittington and His Cat by Brown, Marcia.

The Little House by Burton, Virginia.

Mike Mulligan and His Steamshovel by Burton, Virginia.

The Ugly Duckling by Cauley, Lorinda.

The Mouse and the Motorcycle by Cleary, Beverly.

The Bears on Hemlock Mountain by Dalgliesh, Alice. (SERIES)

The Lion, Witch, and Wardrobe by Lewis, C. S. (SERIES)

Time of Wonder by McCloskey, Robert.

The Velveteen Rabbit by Williams, Marjorie.

The Gingerbread Boy by Galdone, Paul.

The Three Bears by Galdone, Paul.

Squanto and the First Thanksgiving by Kessel, Joyce.

Keep the Lights Burning, Abbie by Roop, Peter and Connie.

Madeline by Bemelmans, Ludwig. (SERIES) – WE LOVE THESE!

The Story about Ping  by Flack, Marjorie

Millions of Cats by Gag, Wanda.

Thunder at Gettysburg by Gauch, Patricia.

The Story of Ferdinand by Leaf, Munro.

Song of the Swallows by Politi, Leo.

A Gift for Tia Rosa  by Taha, Karen.

A New Coat for Anna by Ziefert, Harriet

Why Mosquitoes Buzz in People’s Ears  by Aardemas, Verna.

Blueberries for Sal by McCloskey, Robert.

One Morning in Maine by McCloskey, Robert.

Owls in the Family  by Mowat, Farley.

The Railway Children by Nesbit, E.

The King Without a Shadow by Sproul, R. C.

If you have older or younger children, you can find a complete homeschool booklist here…

I love listening to Grade 1 homeschool books as audiobooks. Audiobooks open up a world of adventure to younger children. Listening to audiobooks on Youtube also means you can listen to many audiobooks for free! I would try to find a book title you like and type in the name followed by ‘audiobook’. For example, ‘Little Pilgrims Progress audiobook’. Alternatively, you can listen on Audible which has a better range and better readers. Don’t forget to subscribe to my Youtube channel called ‘How to Homeschool’ here. 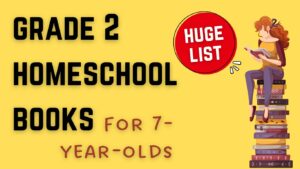 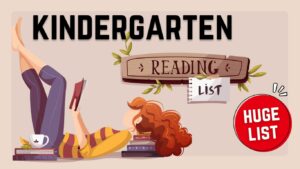